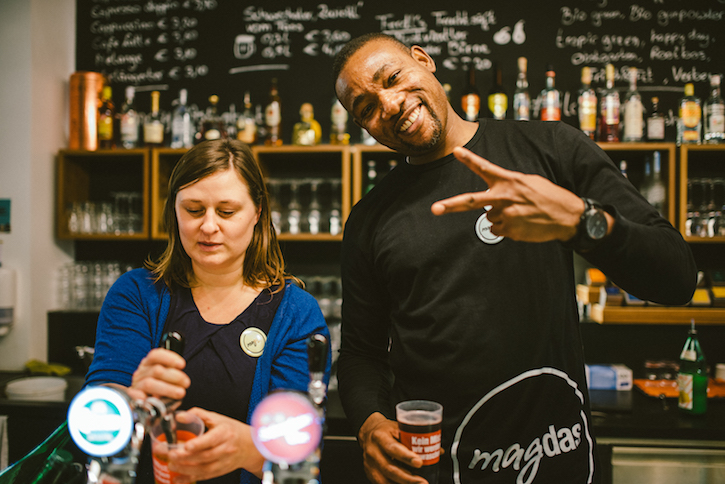 Austria as many other European countries is confronted with an increasing number of refugees who have enormous difficulties finding a job and thus often end up in extreme poverty and social isolation. With no chance to enter the labor market the target group is depending on social support and has no access of proper housing. magdas HOTEL is designed to be a role model in combatting poverty by creating new jobs for accredited refugees: former refugees and hotel experts run a hotel together.

magdas HOTEL is situated in Vienna and accommodates both leisure and business travellers from all over the world. It offers all common hotel facilities as well as special services like bike rental, seminar rooms, exhibitions and breakfast in bed. Next time you’ll get to Vienna, come and visit us!

What is your social business idea and how do you impact your community?

Asylum seekers  are excluded from the labor market. As soon as they are granted asylum they are legally allowed to work, however, due to different reasons they often still have difficulties to find a job. At the same time there is a lack of qualified personnel in the tourism industry. In order to tackle both issues, magdas developed a concept for a social business hotel run by refugees and experienced staff.

The team of magdas HOTEL consists of 20 former refugees and 10 hotel experts – all together from 16 different countries, 26 languages are spoken. Together they are developing magdas HOTEL further. Training is done on the job as well as in special courses supported by professionals and volunteers.

A hotel as a common ground for people with different cultural, professional and social backgrounds represents an excellent opportunity to employ and to integrate this neglected target group and to combat poverty within this target group. By cooperating with training institutions and the tourism industry we are able to give the refugees a proper training and later transfer them to our partners.

magdas HOTEL is designed to be a role model  by creating new jobs for accredited refugees. magdas is focusing on the talents and strengths of the target group. The HOTEL tries to solve both social and economic problems with entrepreneurial tools. The focus is not the maximization of profit, but the maximization of societal benefits, humanity and openness.

What was the biggest obstacle to overcome while developing your business?

The place a hotel is situated at is crucial. It was not easy to find an appropriate building. Finally, a former retirement home of Caritas was chosen to be a perfect match speaking of location as well as the structure of the building. However, lots of improvement and renovation still had to be done with limited financial resources. Therefore, we tried to find innovative solutions: Firstly, magdas HOTEL was designed in an upcycling and vintage style. We tried to reuse as much furniture of the former residents as possible. Secondly, we involved companies, neighborhood and volunteers. They supported us during the planning and building period, and they still do.

What means success to you?

After a nine month planning and building period magdas HOTEL opened on 14th of February 2015. That was our first success. The media coverage was overwhelming as it was the first project of this kind in Austria, respectively in Europe. Nearly every newspaper in Austria but also the Guardian, NZZ, die Zeit, Süddeutsche Zeitung, CNN, BBC and many more wrote and reported about magdas HOTEL and the idea behind.

In the first year 20.000 hotel guest got an impression of the skills, potentials and ambitions of refugees. The broad meda coverage online and offline affected the perception of refugees already in a very positive way. Around 1.000 school kids, students, staff from various companies, politicians and other interested people visited the hotel to learn more about the project.

At the moment magdas booking rate is around 60 to 65 percent. Moreover the bar and coffee area successfully hosts receptions for up to 100 people. However, by doing all this we do not focus on the maximization of profit, but the maximization of humanity and openness.

Organisations from all over Europe have already shown interest to transfer the idea to other European cities allowing refugees all over the continent to find a new perspective in their new home country and stand on their own feet and be able to escape poverty.

Do you have any advice for aspiring social entrepreneurs?

It is possible to turn disadvantages of people into advantages: at magdas HOTEL refugees become hosts. Due to their language and intercultural skills they fit perfectly into the hotel industry. Try to find a niche like that when thinking about labor market projects.

You don’t need to have „the” solution to change the whole world. One small step is (difficult) enough. Often it is the simple, more or less obvious ideas which have the greatest impact when realizing them. So it is more about observing than inventing completely new things.